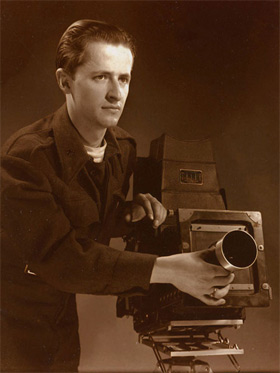 Robert Courtemanche founded the RC Studio in 1947. Shy and quiet by nature, this man was literally transformed whenever he held a camera in his hands. Being among the few people to own a camera, the photographer of those days had to be everywhere, much like a reporter. Thanks to his lens, he may have met more people than most of Magog's mayors. He acted as a journalist, documenting the tragedies, weddings, christenings, Christmas parties and other events of his time... even funerals.

Talented portraitist, he was able to capture a good part of Magog's history. His son, Marcel Courtemanche, became an art dealer a little by chance. Before it was divided into two distinct entities, his business was exclusively centered around photography and framing.  « It is while framing the canvases brought to me by various artists that the idea of gathering some of them for display came to me." As well as picture framing, The Courtemanche Art Gallery showcases original works by some of the best contemporary Québec artists. The gallery is located at 820, Principale Street West, on the shores of Lake Memphremagog in Magog.